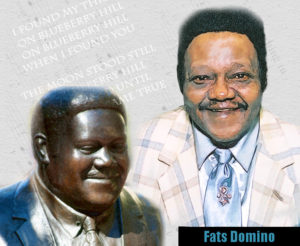 He was born and raised in New Orleans, Louisiana. His 9th ward home was destroyed in Katrina but was rebuilt.

Fats Domino released a prolific series of hit songs with producer and co-writer Dave Bartholomew. Domino finally crossed into the pop mainstream with “Ain’t That A Shame” (1955) His recording”Blueberry Hill” and was his biggest hit. It sold more than 5 million copies worldwide in 1956–57. He was inducted into the Rock and Roll Hall of Fame 1986

In the 1980s, Domino decided he would no longer leave New Orleans. Having a comfortable income from royalties and a dislike for touring, and claiming he could not get any food that he liked any place else.

His induction into the Rock and Roll Hall of Fame and an invitation to perform at the White House failed to persuade Domino to leave home.

The secret of Fat’s success “You got to keep a good beat,” Domino said in a 1956 interview in Downbeat magazine. “The rhythm we play is from Dixieland — New Orleans.”

Fats Domino’s 9th ward home was destroyed in Katrina but was rebuilt.