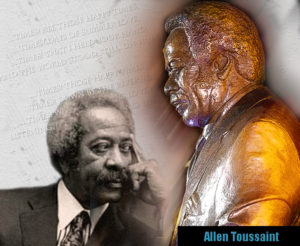 Toussaint is a New Orleans native and began playing piano at an early age. His mother often fed Allen and his musical friends practicing in their home.

Allen’s first musical breaks came when he performed with Earl King and also found regular gigs at a local night club the historic Dew Drop Inn. His music found the national spotlight with his instrumental entitled “Java”, which became a big hit for Al Hirt.

In his early years, Toussaint teamed up with Marshall Sehorn,to start their own record label. In 1973 they formed the Sea-Saint, the highly successful recording studio in New Orleans. Unfortunately, it was destroyed during Katrina.

Toussaint’s piano and arrangements show up on hundreds of records and has been called the Dali Lama of Rock and Roll. His songs and musical collaborations make for a long list of who’s who performers such as the Rolling Stones, Paul McCartney, The Band, The Who, Robert Plant, The O’Jays, Ringo Starr, and the Meters to name a few, His biggest break came when his song “Southern Nights” recorded by Glen Campbell was #1 on the pop charts.

He was inducted into the Rock and Roll Hall of Fame in 1998, 2009 the Louisiana Music Hall of Fame and 2011 Blues Hall of Fame. His career has endured for over 50 years and continues to be a driving musical influence in the Crescent City.